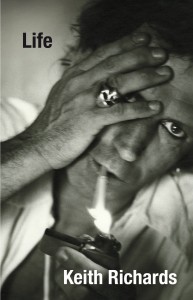 Recently the Audio Publishers Association announced the nominees for the top level categories for their 2011 AudiesÂ® Awards.Â  I was half tempted to put a picture of Johnny Depp here instead of Keith Richards, whose autobiography has been nominated for AudioBook of the Year.Â  Johnny Depp is said to be one of the reasons why this audio books was nominated.

He is one of the narrators on the audio book and let’s face it Johnny Depp can do no wrong.Â  He continues to be popular and rumor has it he used his impression of a drugged out Keith Richards as his inspiration for the voice of his Jack Sparrow character in Pirates of the Caribbean.Â  The marketing campaign for the audio book Life leveraged Johnny Depp’s involvement and am sure his popularity was able to draw in some that would not be audio book listeners.

We write about the AudiesÂ® each year since they really are the only awards dedicated solely to the audio book industry.Â  The awards are given out in over 30 categories, specifically genres but the top awards of AudioBook of the Year and Distinguished Acheivement in Production of course get more attention.Â  They remind me of the Oscars since many of the narrators tend to be from the entertainment industry like Johnny Depp.Â  There also are some narrator stars though that have made their name mainly in the audio book space like Simon Vance.

The awards will be announced this month at the annual AudiesÂ® Award Gala that is held in New York.Â  It will take place on Tuesday May 24th.Â  For more details you can look through the APA press releases that should be available on the www.audiopub.org website.

The nominees for 2011 AudioBook of the Year are:

The nominees for 2011 Distinguished Achievement in Production are:

These books are available through Audible.