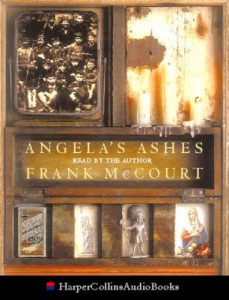 Sadly Frank McCourt was lost to us at the age of 78 yesterday.Â  He passed away due to illness related with meningitis and cancer(melanoma) though the specific details are yet to come out.Â  Anyone interested in reading would have heard about Frank McCourt because of his Award Winning book Angela’s Ashes.

Besides his contributions to the literary world it would be a shame not to acknowledge his contribution to teaching.Â  Teaching our children is one of the most important jobs anyone can have and he did it for years.

His gift to the audio world was his narrating of his own books.Â  Sometimes authors are not the best at narrating their own works but Frank McCourt brings his books to life with his irish brogue and the ability to convey both humor and sarcasm to sometimes difficult topics.

He did not start his career in writing until after retiring.Â  His autobiographical books bring to life the challenges of growing up in Ireland and what followed here in the US.Â  It is a shame that he did not start writing sooner but he is quoted as saying his life experiences are what allowed him to be the writer he became.

Frank McCourt’s books truly work well for the audio book format.Â  Biographical audio books are basically the old fashioned story telling that happens in kitchens and living rooms all over the world.Â  Stories being passed down from one generation to the next.Â  Frank McCourt has given us the gift of actually sharing his story for all of us to enjoy and learn from.