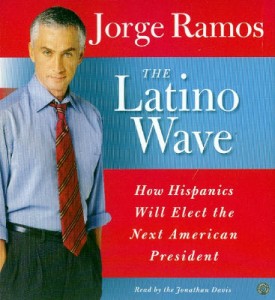 In honor of Hispanic Heritage Month we are spotlighting some of the Hispanic authors in our audio book collection.Â  For fans of Univision and members of the wider latino/hispanic audience Jorge Ramos isn’t a stranger.Â  He has been the news anchorman for UniVision for more than twenty years.Â  Though much of his work is appreciated by the hispanic community his book the Latino Wave seemed to careen him further into the national spotlight.

The Latino Wave is a book about how the Latino population is having more power in American politics primarily because it is forecast to grow into a majority in the foreseeable future.Â  Though written in 2004 the book offers many insights into the growing influence of the Hispanic community.Â  The Spanish Language version of the book La Ola Latina is read by Jorge Ramos himself.

We also have both language versions of Ramos’ Dying to Cross about a tragedy involving immigration.Â  Though Morir en El Intento has garnered some criticism for attributing blame inconsistently it does humanize the quest that drives many immigrants to find a way into the U.S.Â  As a naturalized U.S. Citizen from Mexico it of course has a personal perspective.