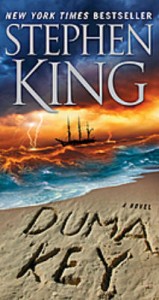 As I mentioned in my last post I was looking forward to the 2009 AudiesÂ® being announced since the awards ceremony was Friday evening.Â  I checked the Audies site before I went to sleep on Friday and then on Saturday morning.Â  On Saturday morning the put up the PDF with all of the award winners.Â  As some of you may know already Neil Gaiman won the Audio Book of the Year for the Graveyard Book.

Afterwards I came to find out that he had been twittering on Twitter as the ceremony was going on under @neilhimself.Â  I have to say that was pretty cool.Â  I have just started to use Twitter and am starting to see how extremely powerful it can be as a comunications tool.Â  There were also a couple of other Twitterers at the Audies so it must have given many a feeling of being there!

I am glad to say 8 books in our catalog won.Â  The insert is for Stephen King’s Duma Key which won in the Fiction Category.

If you want to see the rest of the winners please go to the AudiesÂ® announcement site.

The 2009 AudiesÂ® Awards Being Announced Tomorrow